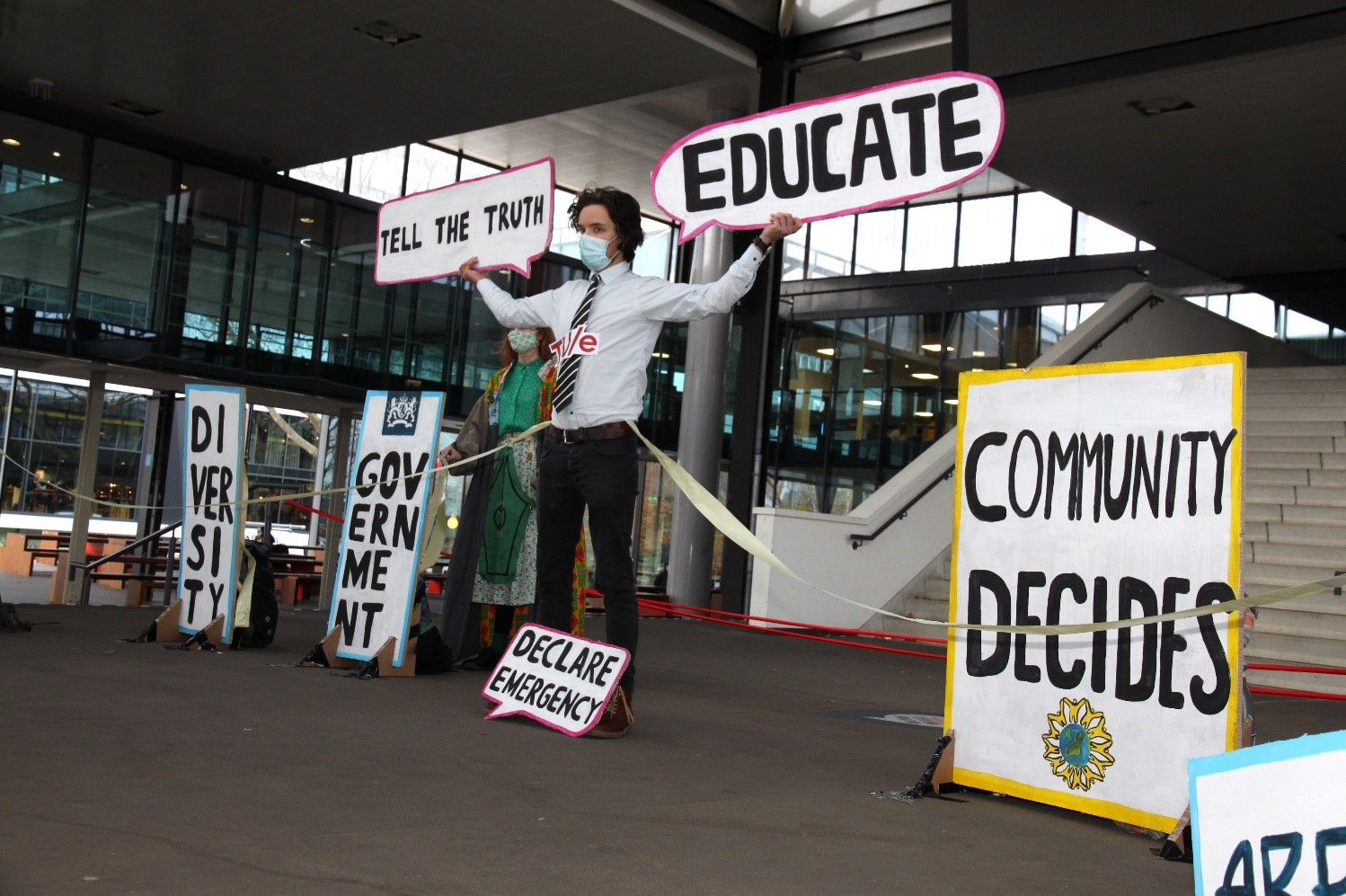 From time to time, the Low Carbon Initiative crosses paths with other climate focused initiatives active at the TU/e or universities elsewhere. We are happy to give their stories a place on our website, and be a platform of (climate-friendly) inspiration. This time, we have a guest contribution by University Rebellion TU/e.

Last year, overshadowed by COVID-19, locust swarms “some 3 times the size of New York City” were raiding their path through East Africa and West Asia, leaving nothing but dead branches behind. This locust plague – the worst in 50 years – was triggered by an anomaly in tropical cyclones, one among many signs of the unfolding Climate Crisis. While Europe was struggling with an ill-equipped health sector, subsistence farmers lost their crops within a matter of days. Not to mention the raging wildfires, storms, droughts and floods affecting so many parts of the world with disturbing intensity in 2020. While we are still in the midst of a Corona pandemic, we are simultaneously facing more terrifying and decisive crises. While the Global North has experienced relatively few extreme weather phenomena induced by climate change, the Global South has been suffering from these events for years.

Despite the already dire situation – with economies on hold, hospitals overwhelmed and high Corona death tolls throughout the Global North – we must not forget to tackle the looming climate emergency. Our time is running out, and it is so utterly important to rethink production, consumption and behaviour patterns in the Global North. According to a recent Oxfam report, more than half of CO2 emissions between 1990 and 2015 can be traced back to the world’s most affluent 10% while 3.5 billion people only emitted 10%. Even more shocking, the richest one percent emitted twice as much as the poorest half of humanity in the same time period. Therefore, we emphasize that the Climate, Ecological and Social Crisis is the result of underlying socioeconomic structures. These emerged from colonial exploitation and are based on an ideology of infinite growth on a planet with finite resources.

What does this have to do with academia?

We might think of universities as a beacon of independent knowledge, constantly shaping our society and leading us towards a fair, sustainable and inclusive future, for the good of people and planet. But this is unfortunately not what so many universities across the Netherlands and worldwide are doing just yet. We at University Rebellion think it is time we changed our course. Academia has been increasingly ruled by market logic, often perceiving knowledge as a commodity in a capitalist system putting profit over people. Being students and scholars in an affluent country, we have the privilege of accessing and contributing to this vast body of knowledge, and this brings about a unique awareness and responsibility. For researchers and scientists this means that collaboration and partnership with polluting and injustice-inducing industries can by no means be justified – not even if motivated by so-called “sustainable development”. The diffusion of blind techno-optimism – i.e. the myth that smart and “clean” technology alone will drive us out of the crisis – is in fact one of the most effective results of corporate greenwashing. Complex, large-scale problems rarely require simple solutions, and as we live in a largely interconnected world, scholars need to develop a broader systemic view, and acknowledge the socio-economic factors that harm nature and fuel global injustice through exploitation of resources and labour. For lecturers, this implies teaching and telling the truth about the emergency we are facing – to their students and to the general public, including policy-makers.

This also means that activities previously deemed necessary in academia have to be reconsidered. Researchers and scientists, especially in the field of sustainability, face the ironic dilemma of fighting the climate crisis while at the same time having to resort to extremely polluting means of transportation for knowledge dissemination. This hints specifically at the frequent attendance of international conferences worldwide by means of flying, that, despite accounting for a small share of global emissions, has seen an unpredicted increase pre-Corona. Also, the choice of high-budget and often luxurious far-away venues for these events, typically tailored for attendance by Global North academics and their industrial partners, makes it unaffordable for scholars of the Global South to participate. This reinforces the patterns of global injustice and prevents the diffusion of free and independent knowledge. In this context, we are calling for smarter and more inclusive modes of scientific communication, allowing academics to stay within a limited ‘carbon budget’ and ensuring inclusive participation beyond academia that fosters a true diversity of knowledge. Moreover, exchange of information and knowledge must not be driven by corporate interests but by genuine belief and determination that academia can and wants to play a role in tackling the unfolding crisis.

Science is clearly telling us that we’re running out of time. Since authorities refuse to acknowledge the urgency of the present situation and fail to act upon it, we must raise our voice and take action. University Rebellion emerges as a national movement of students and academic staff with the aim to decolonialize, decarbonize and democratize Dutch universities, to hold them accountable to their moral responsibility by organizing non-violent direct action. For us, the focus of higher education must go beyond teaching. Academia must take a leading role in radical change, especially advising policy-makers and condemning government inaction. 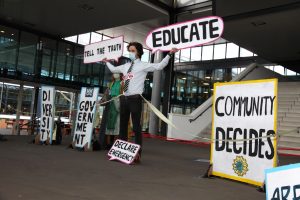 We demand that universities Tell the Truth by declaring the climate and ecological emergencies and calling for social and climate justice, so that awareness can be spread about the root socio-economic causes of the current crisis.

Furthermore, universities must Act Now and demand action from the government, while also aiming to quickly become carbon neutral and cutting ties with the fossil fuel industry themselves. The university must also fight internal discrimination and boost inclusivity and diversity of knowledge. Universities should allow more time for education of students to take on different perspectives on the knowledge provided to them. Only this allows for fact-based critical thinking and engagement. It is also clear that the solutions to the problems caused by our current socioeconomic system cannot be found in that very system. Therefore, a radical change of curricula is necessary to teach students the knowledge, lived experiences and skills needed to implement a radically different socioeconomic structure.

To make this possible, universities must also implement an internal management system based on a true democratic principle, meaning that The Community Decides. A deliberative student and staff assembly, unaffected by market logics, can effectively contribute to drive the university towards inclusivity and carbon neutrality.

We are calling all students and staff members at TU/e to take an active role in the fight against the looming crisis we are facing. Therefore, we urge like-minded people of academia to join the University Rebellion. More information about us can be found on our website and our demands are listed in our manifesto.

On behalf of University Rebellion TU/e,